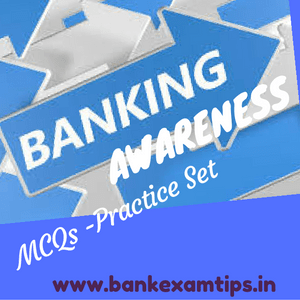 1. Which was the first bank corporate by Indians in 1881?
(A) State Bank of India
(B) Avadh Commercial Bank
(C) Reserve Bank of India
(D) Nainital Bank
(E) National Bank


2. Who will settle the grievances of customers of banks?
(A) Finance Ministry
(B) Government of India
(C) Local Courts
(D) Ombuds Men
(E) Governor of RBI

4. Which of the following Indian Bank is not a nationalized bank?
(A) Oriental Bank of India (OBI)
(B) Dena Bank
(C) Federal Bank
(D) Vijaya Bank
(E) Corporation Bank.

9. BFS (Board for Financial Supervision) constituted in 1994 by RBI to undertake consolidated supervision of
(A) Commercial Banks
(B) Financial Institutions
(C) NBFC (NonBanking Financial Companies)
(D) All of the Above

10) Most of the Banks in India these days are providing M-Banking facility to all customers. What is the full form of ‘M’ in ‘M-Banking’?
(A) Mutual Fund
(B) Message
(C) Money
(D) Marginal
(E) Mobile