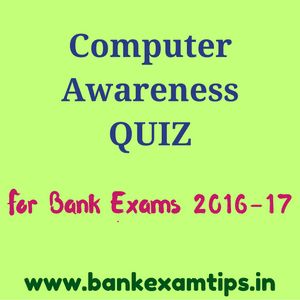 In IBPS Bank Exams, 20 questions are asked on Computer Knowledge. Here we have collected some questions asked in previous IBPS clerk exams. These are useful for upcoming IBPS Clerks Main Exam.


1. Passwords enable users to __________
(a) get into the system quickly
(b) make efficient use of time
(c) retain confidentiality of users.
(d) simplify file structures
(e) None of these

3.Which device can understand the difference between data and program?
(a) Microprocessor
(b) Input Device
(c) Output Device
(d) Memory
4.While sending an e-mail , the ______ line describes the contents of the message.
(a) to
(b) CC
(c) subject.
(d) content
(e) None

6. How many different documents can you have open at any one time?
(a) Note more than three
(b) Only one
(c) As many as your computer memory will hold.
(d) No more than your taskbar can display

13. A complete electronic circuit with transistors and other electronic components on a small silicon chip is called a ______________.
(a) CPU
(b) Work Station
(c) magnetic disk
(d) integrated circuit.

16. Which elements of a word document can be displayed in colour?
(a) Only text
(b) Only graphics
(c) All elements.
(d) All elements but only if you have a colour printer.

18. The codes containing of bars and lines of varying widths or lengths that express the logical steps of an algorithm
(a) programming language
(b) bar code.
(c) an ASCII code
(d) a magnetic tape

19. Which of the following is a storage area within the computer itself which holds data only temporarily as the computer process instructions?
(a) main memory
(b) The control unit
(C) read only memory.
(D) The hard disk

25. Which device is used as the standard pointing device in a Graphical user environment?
(a) keyboard
(b) Joystick.
(c) Mouse
(d) Track ball

26. _________ are specially designed computer chips that reside other devices such as your car or electronic thermostat
(a) Robotic computers
(b) Mainframes
(c) Embedded Computers
(d) Servers

27. The process of computer receiving information from a server on the internet is called as
(a) pulling
(b) pushing
(c) transferring
(d) downloading.

28. Computer programs are written in a high level programming language however, the human readable version of a program is called ___________.
(a) cache
(b) program code
(c) source code.
(d) machine code

29. A kiosk ___________
(a) describes a computer’s type, processor, and operating system
(b) is a computer station that provides the public with specific and useful information and services.
(c) combines microscopic electronic components on a single integrated circuit that processes bits according to software instructions
(d) is data organized and presented in a manner that has additional value beyond the value of data itself

30. The part of the CPU that accesses and decodes program instructions and co-ordinates the flow of data among various system components is the ____
(a) ALU
(b) control unit.
(c) mother board
(d) RAM 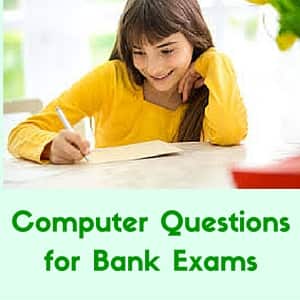 Computer Questions for Bank Exams – SBI Clerks 2016. 1. Whenever we have to give … 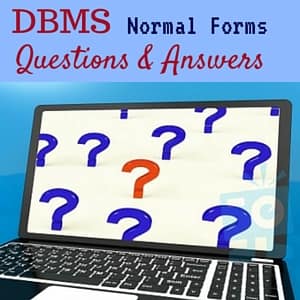 Short Notes on Normalization: The process of organizing data model to efficiently store data and … 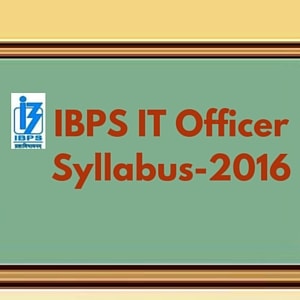