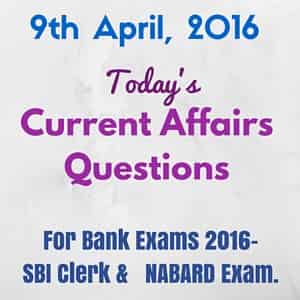 1.On 8th April 2016, the union govt. has distributed 5100 E-Rickshaws through BMC (Bharathiya Micro Credit). Name the Yojana under which this distribution has taken place?

Pradhan Mantri Mudra Yojana (PMMY). In which the e-rickshaw owner has to repay Rs. 235 on the daily basis in such a way to repay the complete amount within 2 years.

2. Recently, The central govt. employees got to hike in their DA and Basic Pay of their salaries. How much percentage hike the govt. announced for central government employees?

3. Name the Indian Cricket Legend who endorses the ‘Skill India Campaign’ to provide awareness on skill development with reach target of 40.2 crore youth by the year 2020?

Sachin Tendulkar (The main aim of this campaign is to provide awareness on skill development and its importance in one’s personal growth).

4. Which country topped the list of most Optimistic Consumers 2016?

5. How much percentage of global trade growth forecast has been reduced by WTO 2016?

7. Which country is constructing the market complex of worth $30million in Tibet near to the India-Nepal border?

8.What is the border name of India and Nepal?

9. What is the border name of India and China?