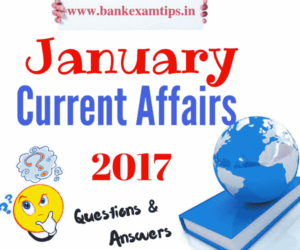 These are the important current affairs  from the daily news updates in the month of January 2017  on different topics – Banking, Economy, National and International affairs, Important days,  Appointments, Awards & Honours, Science & Technology, Sports and Obituaries, Schemes and important books and authors etc.,

2) Who is the CEO of BCSBI ( Banking Codes and Standards Board of India)?
Anand Aras.

3) Expand BCSBI, Which plans to organise “Know Your Rights” programme to enhance awareness on Banking Codes from basic level for the first time in selected urban and rural areas in India?
Banking Codes and Standards Board of India

5) Which bank has been penalised by RBI and imposed Rs.75Lakhs fine for violating the KYC norms of RBI?
Bombay Mercantile Co-Operative Bank.

7) Which type of banks are not authorised to accept deposits under PMGKY (Pradhan Mantri Garib Kalyan Yojana) Scheme?
Co-Operative Banks.

11) The EPFO (Employee’s Provident Fund Organization) has lowered the interest rate on EPF deposits to _________________ for FY17 from 8.8% in 2015-16.
8.65 percent
Notes: EPFO comes under the administrative control of the Ministry of Labour and Employment,
Union Minister of Labour & Employment – Shri Bandaru Dattatreya.

15) What is the estimated amount of deposits of old notes (Rs.500/1000) that RBI may have received during demonetisation exercise from 9th November to 30th December 2016?
Rs 15 lakh crore (Approx.)

16) Which e-commerce mobile platform got approval from RBI to set up ‘Payments Bank’ and plans to launch Payments Bank in February 2017?
Paytm.

18) Who has been appointed as the new deputy governor of RBI (Reserve Bank of India)?
Viral V Acharya

20) Banking Cash Transaction Tax (BCTT): The tax levied on cash deals of Rs 50,000 and above. (The final decision will be taken after examining the recommendations of Chief Ministers Panel).

22) Which is the world’s first country declared to appoint a ‘digital ambassador’ to manage its relationship with technology giants like Google and Apple?
Denmark.
Capital: Copenhagen, Currency: Danish krone.

23) Under which scheme, The union ministry plans to create employment opportunities to 1 crore youth by the year 2020?
Pradhan Mantri Kaushal Vikas Yojana (PMKVY)

25 Which airport has won the ‘Golden Peacock Award’ for CSR (Corporate Social Responsibility) in the aviation transport sector for the year 2016?
Delhi International Airport Limited (DIAL).

27) Who has been appointed as new director of CBI (Central Bureau of Investigation)?
Alok Verma.

28) Who is the newly appointed chairman of the Eastern India Regional Council of the ICSI (Institute of Company Secretaries of India)?
Siddhartha Murarka.

29) Who took charge as the interim CEO of Prasar Bharti on 15th January 2017?
Rajeev Singh.

30) Who has been appointed as “COO – Chief Operating Officer” of the transporting app of Ola?
Vishal Kaul.

31) Who is the newly elected president of European Parliament?
Antonio Tajani.

33) Which former Indian cricketer has been inducted into Legend’s Club Hall of Fame?
Kapil Dev.

40) Name the Olympics Medal winner and world champion in Gymnastics, who has been retired from sports at her early age of 19 due to damage her feet recently?
Yana Kudryavtseva (She won 13 times world championships from 2013 to 2015).

43) Who has been selected for the National Geoscience Award for 2016 for his distinguished work in the field of Geo-Environmental studies?
Keshav Krishna
NGRI: (National Geophysical Research Institute)
Union Ministry of Mines: Balvinder Kumar

48) According to UK’s FSA (Food Standards Agency) Research, Which food items cooked to brown can cause cancer risk?
Toasted bread, chips, and potatoes. (The chemical named ‘Acrylamide’ is produced and it causes cancer).

50) Name the 3 satellites that China has launched with Kuaizhou-1A rocket for the first time from northwestern China’s Jiuquan Satellite Launch Center in Gansu?
Caton-1, satellite JL-1, and CubeSats XY-S1. and ”

51) Under which scheme, The union ministry plans to create employment opportunities to 1 crore youth by the year 2020?
Pradhan Mantri Kaushal Vikas Yojana (PMKVY)

52) Which country is hosting the annual meeting of WEF (World Economic Forum) in 2017?
Switzerland, Davos-Klosters.

54) Which state has set a new world record by singing the national anthem by more than 3.5 lakh people in an event?
Gujarat ( Rajkot district )

55) India has stood at which position in Corruption Perception Index (CPI) for the year 2016?
79th Rank.

58) Who is the chairman of IRDAI eight-member Committee formed to review life insurance product regulations?

62) Which country has been decided to cut vegetable imports from India for 10 years?
Nepal

63) According to the US- Scientists, Which year has been declared as World’s Warmest Year?
2016

64) ___________ has recently withdrawn the Visa-Free arrival facility for Indians?
Hongkong

65) Which Day is observed as National Voters Day to encourage the youth (Above 18 years) to enrol and participate in voting?
25th January.

66) According to BCG (Boston Consulting Group) survey, Which company has been topped the list of the world’s 50 ‘Most Innovative Companies’?
First – Apple,
second – Google,
fifth – Amazon,
ninth – Facebook,
Tenth – IBM.

67) Who has been sworn in as 45th President of the United States, for the first time in eight years?
Donald Trump.

70) Name the campaign which has been launched to provide quality medicines at affordable prices in the masses by the Department of Pharmaceuticals?
Jan Aushadhi.

71) Which state govt. has launched the ‘Anandam Scheme’ to help the poor and needy people in the state and set up some fixed places in each state to collect the donations from rich people?
Madhya Pradesh ( CM: Shivraj Singh Chouhan)

72) Which union ministry launches the Web portal ‘ShaGun’ for the Sarva Shiksha Abhiyan (SSA) to get progress in the Elementary Education sector of India with the implementation of innovative ideas?
Human Resource Development (HRD) Minister- Prakash Javedkar.

73) As per WEF (World Economic Forum) Report, Which Indian city is named as the most dynamic city in the world?
Bengaluru
Note: Hyderabad is in fifth place.

74) The Kerala CM ‘Pinarayi Vijayan’ has launched which scheme to make developments in the health sector of the state?
E-Health Kerala Scheme (They provide e-health cards).

75) Which country has closed the FM radio in the country from the beginning in 2017?
Norway ( Capital: Oslo, Currency: Norwegian krone).

76) Name the scheme that has been launched by Prime Minister Narendra Modi as skill development program that provides training and certifies Indian Youth who are interested in overseas employment?
PKVY (Pravasi Kaushal Vikas Yojana).

77) Who is the Union Textile Minister of India, she has inaugurated India International Garment Fair (IIGF) 2017 at New Delhi?
Smt. Smriti Zubin Irani.

78) The island ‘karang’ is located in which state recently in the news as it became the first cashless Island by promoting digital transactions?
Manipur.

80) The National Award Winner ‘Deepak Roy’ died at the age of 67, He belongs to which field?
filmmaker (His movie ‘“Limit to Freedom” got the national award in 1996).

81) Name the person who died recently and popularly known as ‘Black Hole Man of India’?
CV Vishveshwara ( Scientist made his extensive contributions in the discovery of the black hole in India).