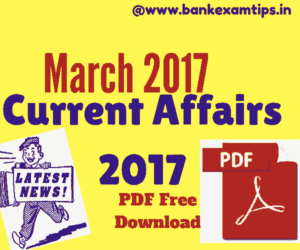 Which telecom company has been entered into an agreement with Tikona Digital Networks to buy its 4G spectrum business of worth Rs.1,600 crore?
Bharathi Airtel.

Which country has got prestigious tourism Destination Award 2017?
Sri Lanka

Which university has been conferred with Annual Visitors Award for best university 2017?
Jawaharlal Nehru University (JNU).

Which country of India has test fired land based anti-ship missile in March 2017?
Pakistan

According to external affairs ministry, The India’s contribution towards United Nations hiked by 55% to __________.
Rs. 244 Crore.

The four-lane ‘Extradosed’ cable-stayed bridge has been inaugurated in which city of the Gujarat by the Prime-Minister Mr. Modi on 7th March 2017?
Bharuch.

India has been signed with which country to make amendments in Double Taxation Avoidance Agreement protocol?
Belgium.
Capital: City of Brussels
Currency: Euro.

According to Economic Intelligence Unit(EIU), Which Indian city is considered as the cheapest city as per worldwide cost of living report 2017?
Banglore.

Recently Google has acquired which start up a company for its undisclosed amount at the Cloud Next 2017 conference to boost data play?
Kaggle.

Which mission has launched by NASA to explore the mysterious moon of Jupiter in 2020?
Europa Clipper.

India stood at which position in ‘Human Development for Everyone Report 2016’ by United Nations among 188 countries?
131.

According to Adobe Insights Report, What is the growth in new internet users from the last 3 years?
268.9 million (since 2014).

Which Indian city have the first ever vertical garden?
Banglore.

India ranked which position in Human Development Index among 188 countries by United Nations?
131

Which country was at the top position in ‘Global Health Index 2017’?
Italy

The ‘Kurukh’ tribal language of which state has been given official status from April 2017?
West Bengal.

Which neighboring country of India celebrates its 46th Independence Day on March 26, 2017?
Bangladesh

Which of the three has signed MoU for the development of the Deoghar Airport in Deoghar district of Jharkhand?
AAI, DRDO, and govt. of Jharkhand.

Who was appointed as head coach for football team under 17?
Luis Norton de Matos.