Which day is observed as ‘International Day of Older Persons’?
1st October 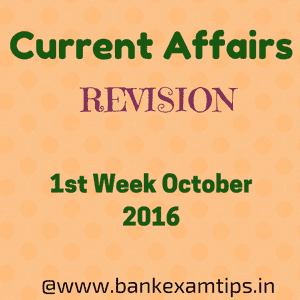 Who is the CEO of Aditya Birla Retail company ?
Mohit Kampani.

Who is the author of the novel ‘Anantha Jeevanam’?
Prof. Kolakaluri Enoch

Who has been honoured with 24th ‘Moorti Devi Award 2015’?
Prof. Kolakaluri Enoch.

Who is the CEO of Tata Group?
Cyrus Mistry.

Which day is celebrated as ‘Indian Airforce Day’?
8th October

How much amount was approved by the union urban ministry under HRIDAY Scheme?
Rs.114 crore.

Who has been honoured with “Sustainable Development Leadership Award” by the president ‘Pranab Mukherji’?
Sikkim Chief Minister Pawan Chamling.

Who will be invited as Chief Guest at India’s Republic Day 2017 in India?
Sheikh Mohamed bin Zayed Al Nahyan (Prince of Abu Dhabi).

Who is the Ambassador of India to the Republic of Guinea?
Shri R Ravindra.

Which day is celebrated as ‘Worlds Teachers Day’?
5th October.

Which Indian city is considered as ‘Cleanest Tourist Destination’?
Gangtok.

Name the first country which has banned the plastic disposal plates and cups in all over its country?
France.

Recently which bank has opened its overseas branch in Myanmar at Yangon?
SBI (State Bank of India).

Who is the newly elected president of Indian News Paper(INS) Society?
Somesh Sharma.

Who was appointed as the brand ambassidor of Haritha Keralam Project?
Yesudas.


Who is elected as the chief of IBA (Indian Banking Association)?
Rajeev Rishi

Who won Nobel Prize 2016 in the field of Medicine?
Ohsumi.