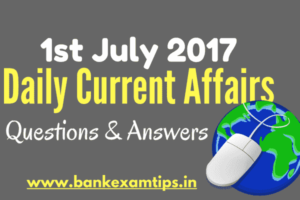 1. Who was appointed as India’s ambassador to Greece recently?
Shamma Jain.

3. The India has contributed how much fund amount for UN Peacebuilding Fund to build and sustain peace?
$500,000.

4. On which day ‘International Day of Peace’ has been observed every year?
21st September.

5. Who is the president of the IEA (International Economic Association) for the next 3 years?
Kaushik Basu.
Head Quarters of IEA: Barcelona, Spain.

7. Who was appointed as the new chairman of NIFT (National Institute of Fashion Technology) by the Union Government?
Shri Rajesh V. Shah

10. The ‘International Day of Cooperatives’ will be observed on which day in 2017?
1st July ( This is observed on 1st Saturday of July every year).

12. Who has been conferred with ‘Best astrologer of the world’ in 2017 at Moscow?
TS Vineeth Bhatt ( Astrologer & Numerologist, from Hyderabad).

13. The ECI (Election Commission of India) has linked with which social networking site to launch nationwide voter registration reminder?
Facebook.

17. Which of the two countries started their biggest joint military exercise recently on 29th June?
The United States and Australia.