General Awareness is the part of every competitive exam – IBPS Bank Exams. Mostly questions under this section will be asked on the latest happenings from the last 4 to 6 months of the actual exam date. So, friends, be prepared to tackle these questions and get high scores in IBPS Bank Exams 2017-18.

2. The finance ministers and central bank chiefs from the Group of 20 economies (G-20) met recently in Baden-Baden, In which country is Baden-Baden located?
(a) Germany
(b) Austria
(c) Switzerland
(d) Belgium
(e) Sweden

5. Which State recently tagged over 12000 cows with Aadhaar -like 12 digit unique identification number?

7. Anti-Retroviral Therapy is associated with the treatment of which of the following diseases?
(a) Tuberculosis
(b) Diabetes
(c) HIV/ AIDS
(d) Swine flu
(e) Zika virus

10. On which of the following railway routes was India’s first ever train with glass roof coaches flagged off by Railway Minister Suresh Prabhu?
(a) Visakhapatnam- Araku
(b) Jhansi-Lucknow
(c) Mumbai-Pune
(d) Jaipur-Jodhpur

12. MGNREGA recently reached a major milestone by geotagging one crore assets created under it. The types of assets created under MGNREGA include
(a) Flood control measures
(b) Individual assets for sustainable livelihood
(c) Community Infrastructure
(d) Both 1 and 3
(e) All of the above given as options

13.Who was recently became the youngest person ever to be named a U.N. Messenger of Peace?
(a) Justine Bieber
(b) Deepika Padukone
(C) Malala Yousafzai
(d) Roger Federer

16. Who among the following was the only Indian to feature in Fortune’s top 50 global leaders that was released in March 2017?
(a) Arundati Bhattacharya
(b) Mukesh Ambani
(c) Chanda Kochhar
(d) Aditya Puri
(e) P.S. Jaya Kumar

17. According to recent data provided by RBI to the finance ministry, which bank topped the list of banks that witnessed most number of frauds during April-December period of 2016?
(a) Axis Bank
(b) Bank of Baroda
(c) ICICI Bank.
(d) State Bank of India
(e) Corporation Bank

19. Which of the following statements is not correct regarding ” India Innovation Index” that was recently launched by NITI Aayog CEO Amitabh Kant?
(a) It is India’s first online innovation index portal which will rank states based on their innovations.
(b) It was launched in collaboration with the world economic forum and world bank.
(c) It will periodically update Global Innovation Index (GII) indicators and India-centric data from various states
(d) Both 1 and 3
(e) All of the above given as options

20. The Lok Sabha on 7th February 2017 passed the Payment of wages (Amendment) Bill 2017 that permits the employer to pay an employees wages by
(a) Coin or Currency Notes
(b) Cheque
(c) Crediting them into his bank account
(d) Both 1 and 3
(e) All of the above given as options.

23. Robert Taylor, a pioneer of Modern Computing and the Internet passed away in April 2017. He was associated with the development of which of the following programs?
(a) Microsoft word
(b) Google
(c) Email
(d) Bluetooth
(e) HTML

24. Which state has recently became the first in India to establish cashless system for distribution of food grains?
(a) Gujarat
(b) Punjab
(c) Maharashtra
(d) Andhra Pradesh
(e) Kerala 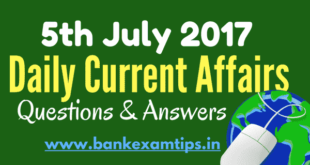