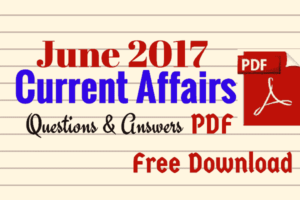 Which bank has started World’s first ATM in 1969 and celebrating its 50th anniversary on June 27, 2017?
Barclays Bank at Enfield in North London.

Which state govt. has signed an agreement with Asian Development Bank (ADB) for loan approval of Rs. 1950 crore for strengthening roads?
Uttar Pradesh.

The World Bank has cleared how much loan amount for making Indian Youth more employable through Skill Development Programme?
$250-million.

Which country unveiled the world’s first train that can able to run on virtual tracks using sensor technology?
China.

Which is the first ever Indian city uses robot inplace of traffic police for controlling unruly traffic?
Indore (Madhya Pradesh).

Which city has become the first Indian city to deliver diesel at home just like milk and newspapers by launching Mypetrolpump?
Bengaluru

Which state government has launched a scheme ‘Test and Treat Strategy’ for better treatment of HIV affected people in that state?
Mizoram.

Which Indian has been honoured with Environment Award for 2017 in Japan?
Shrihari Chandraghat (Indian agricultural microbiologist).

Which yoga institute has been conferred with Prime Minister’s Yoga Award for its outstanding contribution towards the promotion and development of Yoga?
Ramamani Iyengar Memorial Yoga Institute

Who was appointed as the Prime Minister of Romania?
Mihai Tudose.

Who has been appointed as the MD & CEO of IDFC Bank for next 3 years?
Sunil Kakar.

Which bollywood actress has been appointed as the ambassador for Govt. Skill India Campaign by National Skill Development Corporation?
Priyanka Chopra

Who was appointed as the president of India International Centre (ICC)?
N N Vohra (Governor of Jammu &Kashmir).

Which Airlines has considered as the World’s Best Airline at the SKYTRAX 2017 World Airline Awards?
Qatar Airways

Which state government has announced free education for girls in govt. schools and colleges from nursery to Ph.D.?
Punjab

Who was appointed as the goodwill ambassador of UNICEF ( United Nations Children’s Fund)?
Muzoon Almellehan ( Syrian refugee and educational activist).

Who has become the first Indian to complete Solo Race Across America (4941 Km)?
Srinivas Gokulnath