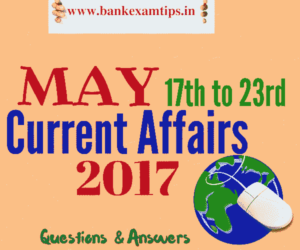 Banking and Economy News May 2017


Which of the private sector bank has signed a MoU with LIC (Life Insurance Corporation) of India for selling LIC products of LIC?
Karnataka Bank.

Which country will be hosting the annual meeting of AFDB (African Development Bank) on 23rd May 2017 for the first time?
India.

Which of the e-commerce mobile wallet has got final approval from the Reserve Bank of India to set up Payment Bank?
Paytm.

Who is the newly appointed Deputy governor of RBI?
B P Kanugo.

What are the two possibilities introduced by the union government for resolving the stressed assets in banking organizations under Insolvency and Bankruptcy Code (IBC), 2016?
SARFAESI and Debt Recovery Acts

The Indian private sector bank – YES Bank has been tied with which financial organization to offer loans for its customers?
Paisabazaar.com.

Who was elected as the first female president of Taiwan?
TsaiIng-wen.

Which is the bilateral naval exercise between India and Singapur?
SIMBEX- 17 (SIMBEX – Singapore-India Maritime Bilateral Exercises).

According to Forbes Magzine, Who topped the list of “Global Game Changers” in 2017?
Mukesh Ambani (For his efforts to spread the internet all over India through Reliance Jio mobile networks).

India has been tied up with which country for mutual cooperation on customs matters?
Tajikistan.

Who was conferred with ‘International Humanitarian Award 2017’ at the Asian Voice Charity Awards?
Jacqueline Fernandez.

Recently, The Maharashtra government has set up _________________ squads to combat open defecation to improve sanitation and cleanliness throught out the state.
‘Good Morning’.

Which state government has banned the mining of sand in Narmada River?
Madhya Pradesh.

Name the committee that has been submitted its report on ‘Scouts and Guides’ for the Union Minister of Youth Affairs & Sports.
Harsha Malhotra Committee.

The ‘Ghughua Fossil National Park’ was located in which state?

Who is the winner of Makati Open Squash Tournament 2017under Men’s Category?
Harinder Pal Sandhu

The Mithaliraj was in recent sports news, She belongs to which field?
Cricket.
She is the first Indian and 3rd cricketer in the world to be captain in 100 ODI Matches
She belongs to Rajasthan.