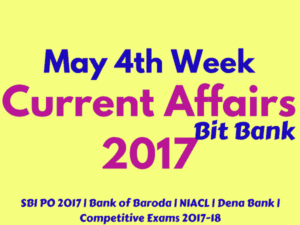 Name the campaign that has been launched for the promotion of toilet usage in the rural areas of the country and
the campaign is lead by Bollywood star Amitabh Bachchan.
‘Darwaza Band’.

Who was appointed as the chairman of IAMAI (Internet and Mobile Association of India)?
Rajan Anandan.

Which country is going to build a war museum in Manipur at Bhisnupur District?
Japan.

Who is the ambassador of Japan to India?
Kenji Hiramatsu.

What does the letter ‘T’ denotes in ETF, frequently uses in the stock market?
Traded ( ETF – Exchange Traded Funds).

The ‘Constantine Mitsotakis’ has died recently. He is the former prime minister of which country?
Greece.

Who is the newly elected president of Ecuador?
Lenin Moreno
Capital: Quito
Currency: US Dollar.

Who is the governor of Manipur recently appointed as chancellor of Jamia Millia Islamia University under UGC?
Nazma Heptulla.

Who was conferred with International Cricketer of the Year award at the CEAT Cricket Rating International awards 2017?
Ravichandran Ashwin.

Who has become the next prime minister of Nepal after the resignation of current PM ‘Pushpa Kamal Dahal’?
Sher Bahadur Deuba.

Who is the Union Minister for Drinking Water and Sanitation?
Narendra Singh Tomar.

Who has been honored with Dadasaheb Phalke Award in 2017?
Priyanka Chopra ( under Internationally Acclaimed Actress category).

Which of the four countries that Mr. Narendra Modi going to visit to strengthen the bilateral ties of India with those countries?
Germany – Spain – Russia – France.

The India has signed the Maritime security agreement with which country and also announced $500 million line of credit?
Mauritius.

According to World Economic Forum Report, Which city is the most crowded city in the world?
Dhaka ( Capital of Bangladesh) – 1st crowded city
The 2nd crowded city is Mumbai (Maharashtra, India).
Head Quarters of WEF – Geneva, Switzerland.

Recently, Life Insurance Corporation of India (LIC) has signed a MoU with which bank for selling LIC products?
Karnataka Bank.