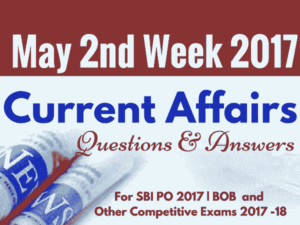 1. According to Savills Tech Cities Index, Which city stood at the top position in the list of most affordable tech cities in the world?
Bengaluru.

2. Which bank has provided a facility to withdraw money through ATMs by mobile wallet?
State Bank of India (SBI Buddy).

3. Who was appointed as the Goodwill Ambassador for Hepatitis by World Health Organization (WHO)?
Amitabh Bachchan.

4. Income Tax dept. has made mandatory to link which of the identity proof for filing IT returns and provided a new facility to link up?
Aadhar With PAN card.

5. Who is appointed as the new Indian ambassidor to France?
Vinay Mohan Kwatra.

6. Who is the new defense secretary of India?
Sanjay Mitra.

7. The foreign doctors who want to work in India need to have ‘Good Standing Certificate’ issued by _____________ of Medical Council of India (MCI).
– Indian Medical Association (IMA) Institute.

8. According to Forbes Middle East list of top 100 Indian business leaders 2017. Who is at the top position?

11. Recently, which of the Indian cricketer was awarded the honorary life membership of MCC (Marylebone Cricket Club)?
VVS Laxman.

12. Who are the first Indian women to be honored with Woodrow Wilson Award for Global Corporate Citizenship in 2017?
Chanda Kochar (ICICI Bank CEO).

14. Who is the new chancellor of JNU (Jawaharlal Nehru University)?
VK Saraswat.

17. Which feature was reintroduced to counter-terror operations by Indian Army after a gap of 15 years?

18. Which of the world cup winning cricket captan’s wax statue was unveiled at Madame Tussauds Museum in New Delhi?
Kapil Dev (He is the captain in 1983 world cup match)

20. Who is the chairman of CBDT (Central Board of Direct Taxes)?
Sushil Chandra.

22. Which day is celebrated as International Nurse Day?
12th May.

23. The National Technology Day will be celebrated every year on which date?
11th May.

24. Name the mobile app that has been launched by central home minister’Rajnath Singh’ to appeal the grievances of parliamentary forces.
‘MHA Mobile Application’

25. Who will be the prime minister of Bahamas?
Hubert Minnis. (Capital of Bahamas: Nassau, Currency: Bahamian dollar).

26. Name the vaccine that has been launched by the union government to combat pneumonia?
Pneumococcal Conjugate Vaccine.

27. India has signed MoU with which country to enhance the efficiency of the urban transport system.
UK (Transport for London).
Union Roads and Transport Minister: Mr. Nitin Gadkari.

29. Which state has been declared as best governance in the country and stood at the top of the Public Affair Index (PAI) 2017?
Kerala.