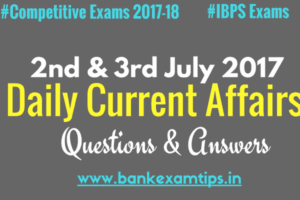 Who will be the next Chief Election Commissioner of India replacing Nasim Zaidi?
Achal Kumar Jyoti.

Who is the newly appointed Attorney General of India by replacing Mukul Rohatgi?
K K Venugopal.

Who has been honored with the Trafficking in Persons (TIP) Report Heroes Award 2017?
Mahesh Muralidhar Bhagwat ( He is the IPS officer in Telangana State).

Name the country that has issued the new 2000 bank note by printing its president’s face on it?
Syria.

According to the latest report of Swiss National Bank, India stood at which position in terms of money parked by its citizens at Swiss Bank by the year 2016?
88th Position.

What is the world’s oldest emergency helpline number of UK, that has completed 80 years of its existence?
‘999’.

Name the mobile app that has won the GSMA Asia Mobile Award 2017 for its contributions towards the United Nations sustainable development goals in Asia?
eVIN.

Which state government plans to set up new SRPF (Special Rhino Protection Force) to enhance the protection of the one-horned rhinos in that state?
Assam.