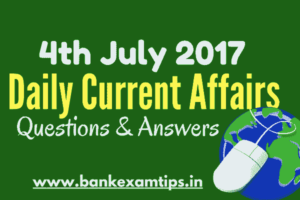 Which organization has started its Payment Bank operations with the effect from 30th June 2017 recently got approval from RBI to set up payments bank?
FINO PayTech Ltd. (FINO Payments Bank).
Head office: Mumbai.

The union government has signed a loan agreement with which bank for $220 million to enhance transport facilities of Rajasthan?
ADB (Asian Development Bank).

Who is the newly appointed MD & CEO (Managing Director & Chief Executive Officer) of Syndicate Bank?
Melwyn Rego (He is the former chairman of Bank of India).

Name the photo book that has released by the Prime Minister ‘Mr. Modi’ containing pictures and articles related to the president’Pranab Mukherjee’s’ tenure.
“President Pranab Mukherjee- A Statesman”.

Who is the author of the book ‘” President Pranab Mukherjee- A Statesman”?
Anand Mishra.

Who is the first Indian to win ‘FIA Formula 3 European Championship 2017’ held in Germany?
Jehan Daruvala.

Which country has won the FIFA Confederations Cup Title 2017 by defeating Chile at Russia?
Germany.

The ‘Ravinder Ramdev’ has died at the age of 82 3rd July 2017, He was popular in which field?
Journalism.

Who is the Union Minister of State for Skill Development and Entrepreneurship?
Rajeev Rudi.

Which state has set a record by planting 6 crore saplings in a single day as part of its massive plantation campaign to save environment and conservation of the Narmada river?
Madhya Pradesh

Which two Indian-Americans has been awarded Great Immigrants Award 2017 for their contributions to enhancing the country’s Society, Culture, and Economy?
Shantanu Narayen ( Adobe CEO).
Vivek Murthy (US Surgeon).

Which Indian American has been considered as the US ambassidor to Peru by the US President ‘Donald Trump’?
Krishna R Urs