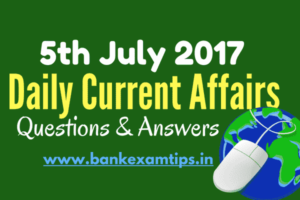 India has started a 14-day joint military exercise by joining hands with which country to promote relations and exchange skills and experiences of both armies in Himachal Pradesh?
Thailand.

The traditional buffalo race ‘Kambala’ has been legalized in the assembly by the president of India, This is the traditional annual race of which state?
Karnataka.

Which Bollywood actor was appointed as brand ambassador of Hyundai India for next two more years?
Shah Rukh Khan

Madhukar Toradmal has died at the age of 85 years on 4th July 2017. Does he belong to which field?
Actor, Director & Writer (He is from Maharashtra).

FPAI started a new program to bring down maternal mortality rate in 58 select villages of the district of which state?
Karnataka.