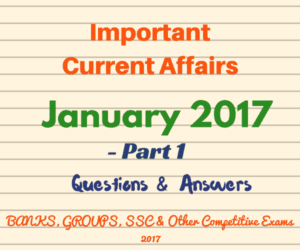 Hello, friends, Here we are sharing some of the important current affairs questions and answers which are very much useful for competitive exams – Banks, SSC, UPSC, Groups, Insurance and Other Government Job Recruitment Examinations 2017.

Which bank has been introduced first humanoid Robot to assist its customers at its branch office?
HDFC Bank.

Who is the Chief guest of 15th Pravasi Bharatiya Divas 2017 held in Bangalore on 9th January 2017?
Antonio Costa (Prime Minister of Portugal).

Name the new human organ that was discovered by Ireland scientists in the human digestive system?
mesentery

Which day is observed as World Braille Day that is celebrated on the occasion of the birth anniversary of Louis Braille?
4th January

Name the committee which was set up to made some developments in National Sports Development Code (NSDC)?
Injeti Srinivas committee.

Who has been appointed as chairman of UPSC (Union Public Service Commission)?
Professor David R. Syiemlieh.

Who is the author of the book “Death Under The Deodars: The Adventures of Miss Ripley-Bean” published by Penguin India?
Ruskin bond.

Who is the author of the book “Just Another Jihadi Jane”?
Tabish Khair

Who is the author of the book ‘The Secret Chord’?
Geraldine Brooks.

In which state, The India’s first transgender school “Sahaj International” was established?
Kerala.

Which country has launched World’s longest bullet train ‘Shangri-La of the World’?
China.

Which is the base year to calculate India’s current GDP rate?
2011.

Who is the MD & CEO of SBI Pension Funds Ltd.?
Kumar Sharadindu.

Which country will be helping India to develop Chennai, Ahmadabad, and Varanasi as Smart cities?
Japan.

Who is the Japan’s ambassidor to India?
MR. Kenji Hiramatsu.

Which Indian origin British professor has received the Knighthood honor for his work as a co-inventor of Next Generation DNA sequencing?
Prof. Shankar Balasubramanian.

How much amount of financial aid will be provided to the pregnant women in rural areas for their medical expenses recently announced by the Prime Minister Mr.Modi?
Rs.6000.

Name the Indian Tennis Sports person who has announced his retirement from professional tennis from January 2017?
Somdev Devvarman.

Who is the new Executive Director of RBI (Reserve Bank of India)?
Surekha Marandi.