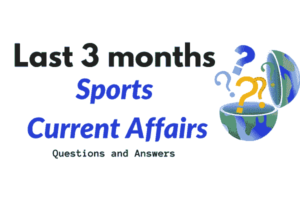 Which Indian city will be hosting the next ‘World Series of Boxing’ in 2018?
Rohtak city (Haryana).

Which country will be hosting the FIFA U-20 World Cup in the year 2019?
Poland.

The first Indian women to win the gold medal at the Senior Asian Wrestling Championships at Bishkek, Kyrgyzstan: Navjot Kaur.

Which country’s membership was reinstated by IOC (International Olympic Committee) as it was accused of doping and suspended previously?
Russia.

Recently Karnataka clinched the Vijaya Hazare Trophy and this trophy is related to which sport or game?
Cricket. ( Totally 27 teams participate. This is also called as Ranji One Day Trophy).

Which tennis player has been honored with Sportsman of the Year award at Laureus World Sports Awards 2018?
Roger Federer (Switzerland).

Who won the national A championship organized by AICFB ( All India Chess Federation for the Blind)?
Kishan Gangoli (Karnataka).

Who has become the first Indian to win a gold medal at the Commonwealth Games 2018?
Mirabai Chanu (Weightlifting).

Who has become the best Indian golfer in the world and won Maybank Championship in Kuala Lumpur, Malaysia?
Shubhankar Sharma

Who was appointed as the Director-General of Sports Authority of India (SAI)?
Neelam Kapur.

Who was selected as India’s Flag bearer at CommonWealth Games 2018 for the opening ceremony of CWG?
PV Sindhu.

Name the person, who has become the youngest captain in ICC (International Cricket Council) world history?
Rashid Khan (He is from Afghanistan and his age is 19 years old).

Which state has been emerged as the first champion with highest medals of Khelo India School Games held at New Delhi?
Haryana. (38 gold medals)

Which country will be hosting the Twenty20 World Cricket Tournament in 2020?
Melbourne, Australia.

Which country will be hosting the world chess tournament 2018 for the first time?
Saudi Arabia.

How many countries will be participating in winter Olympic games 2018 and as part of this, 102 events conducting in 15 sports?
92.

What is the motto of winter Olympics 2018?
Sooharang

Which country has got the highest medals in this Olympics?
Norway. 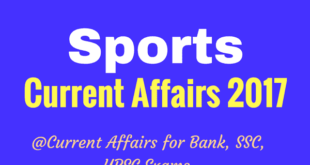