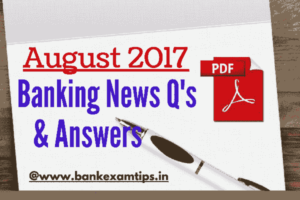 
1. Which public sector bank has awarded best performance awards by NABARD for SHG-bank linkage program in 2015-16 and 2016-17?
Corporation Bank

2. which has launched ‘PlanYourGoal.com’ web portal to help users to plan their investments according to one’s future needs?
ICICI Prudential Mutual Fund

4. According to RBI report – ‘Report on Trend and Progress of Banking in India’, Which two RRBs (Regional Rural Banks) has recorded more than Rs 150 crore net profit of during 2016-17?
Karnataka Vikas Grameena Bank and Andhra Pragathi Grameena Bank

5. As per RBI report, Which denomination of currency notes will soon be available in the market?
Rs. 200.

6. What is the threshold limit decided by the government while doing banking transactions up to which Aadhaar card is mandatory?
Rs. 50, 000.

7. Who is the chairperson of IBBI (Insolvency and Bankruptcy Board of India)?
M.S. Sahoo.

8. Who is the newly appointed MD & CEO of IDFC Bank?
Sunil Kakar.

9. The Kerala based private sector bank ‘Dhanalaxmi Bank’ has been tied up with which organization for bancassurance?
DHFL Pramerica Life Insurance Company.

10. According to FDI Intelligence report, Which country is the top most green field FDI destination in the world?
India.

11. According to the report, which bank is going to acquire Freecharge?
AXIS Bank.

12. Which financial institution has cleared 250 million US dollars loan for skill training in India?
World Bank.

13. Which Indian financial company has been named among top 10 consumer financial services companies in the world?
HDFC Ltd.

14. Which bank has signed an agreement with New India Assurance Company Ltd. (NIACL) to provide security to the cooperative farmers?
APEX Bank.

15. How much amount was approved by the central government for Noida-Greater Noida Metro Rail Project?
Rs. 5500 Crore

16. According to DIPP (Department of Industrial Policy and Promotion), Which country has emerged as the top source of foreign direct investment into India in 2016-17?
Mauritius.

23. Which telecom company is going to sell its controlling stake in Infratel in an effort to spare over $14 billion of debt?
Bharti Airtel.

24. According to the Global Research Firm (IPSOS), Which was listed under top 10 most influential brands in India for the year 2016-17?
Patanjali & Reliance Jio.

25. Which bank has tied up with IIC (Inter-American Investment Corporation) to facilitate trade with Latin America and the Caribbean?
AXIS Bank.

26. EPFO (Employment Provident Fund Organization) has been tied to which corporation to provide housing subsidy of 2.67 lakhs for its members to buy homes under PMAY( Pradhan Mantri Awas Yojana)?
HUDCO (Housing and Urban Development Corporation).

27. Recently which financial organization has signed a 220 million dollars loan agreement with India to improve connectivity, transport efficiency, and safety on the state Highways of Rajasthan?
ADB (Asian Development Bank)

28. According to Asian Development Bank, What is the India’s GDP growth forecast rate for the current fiscal year?
7.4%