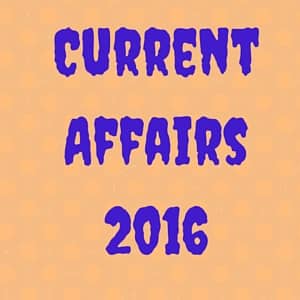 2. What is the name of the India’s First Online interactive heritage portal launched in New Delhi?
Sahapedia.

3. Who has been selected as the contingent goodwill ambassador of Rio-Olympics 2016?
Salman Khan (Bollywood actor).

4.Name the Hongkong’s Cricketer who has been suspended for 2 years and 6 months?
Irfan Ahmed.

5. What is the capital and currency of the Hongkong?
Capital: Victoria, Currency: Dollar.

6.Which bank has launched the campus wallet for students?
Federal Bank.

7. Who was appointed as FTII (Film and Television Institute of India)?
Bhupendra Kainthola.

8. Prime Minister Narendra Modi has launched Rs.8000 crore scheme for free LPG connections to 5000 BPL families.What is the name of that scheme?

Pradhan Mantri Ujjwala Yojana (PMUY) – ( This scheme is established from the subsidy amount saved  from 1.13 crore LPG users willingly by giving up their subsidies).

9. Which did state stand at the top in the list of giving up subsidies of cooking gas?
Maharashtra. (16.44 lakh users has given up their subsidies for cooking gas).

10.According to the latest report by the Confederation of Indian Industry (CII) and consultancy firm Deloitte, What is the worth of domestic e-commerce in 2015?
$16 billion. (39 million online shoppers in 2015)

11. How much amount of investment to be planned by the government for reviving and developing the 75 regional airports to provide air connectivity to small cities and towns in this fiscal year?

Rs.6000 crore (After getting approval, This project will be implemented by Airports Authority of India (AAI)).

12. Which country is the strong partner of developing smart cities in India in terms of design and technology?
Italy.

13. What is the name of the new system that EPFO (Employment Provident Fund Organization) plans to launch on May 1st, 2016 to avoid premature withdrawals and to encourage state governments to join in its pension system?
‘One Employee One EPF Account’

14. Expand NHAI. Who is the chairman of NHAI?
National highways Authority of India and Its Chairman is Raghav Chandra. (The total length of national highways is 96260 km)

15. Bharat Sanchar Nigam Ltd (BSNL), the popular telecom company has saved how much amount due to the usage of energy conservation measures from 2008 to 2016?
Rs.613 Crores.