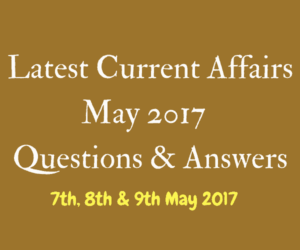 1.Which state government has banned the HFSS (High in Fat, Salt, nd Sugar) food and replace junk food with healthy food in school canteens all over the state?

2. Who is elected as the president of France recently?
Emmanuel Macron

He is the first ever youngest president at the age of 39 years old. Currency of France: Franc, Euro France Capital: Paris

4. What is the goal of Micro Irrigation Fund under NABARD?
‘Per drop more crop’.

5. Which is the first ever Indian film that has crossed 1000 crores collections within 10 days of the release date?
Bahubali – 2

6. According to the Sunday Times Rich List 2017, Who topped the list of the richest people in the UK?
Hinduja Brothers (Srichand & Gopichand).


They are at the top position with 16.2 billion pounds.

They are at the top position with 16.2 billion pounds.

7. On the occasion of the 156th birth anniversary of which famous India poet and Nobel laureate, the India is organizing a festival in Egypt at Cairo from May 8th to 12th May 2017?
Rabindranath Tagore.

8. Who is the first female chief justice of state high court in the country, recently died in May 2017 at the age of 86 years?
Leila Seth.

10. Which country won the Sultan Azlan shah cup 2017 after a gap of 23 years, the hockey tournament held in Malaysia?
Great Britain (Winner).

12. Which telecom company has tied up with the TV channel NDTV for providing news in regional languages for better customer support by introducing Hyperlocal News: My City My News?
Aircel.
Head Quarters of Aircel: Gurugram (Haryana).

13. Who has been awarded as the best actress of the 17th edition of New York Indian Film Festival 2017?
Konkana Sen Sharma ( Film: Lipstick Under My Burkha)

14. Who is the new Chief Minister of Uttar Pradesh?