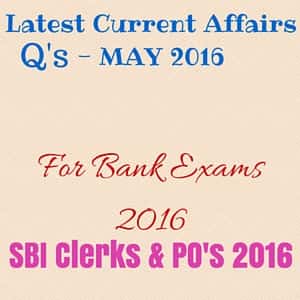 1. In the list of FDI confidence index 2016, India stood at which position?
9th Position.

2. How much amount of loan has been granted by ADB to India to support the ‘robust growth’ in India?
3 million dollars.

5. Which Indian Co-operative bank has donated Rs.1 crore towards the relief of work drought conditions in various parts of Maharashtra?
Bank Saraswat.

6. Name the country which was celebrated the 155th Birth Anniversary of the great poet ‘Rabindranath Tagore’ as a festival?
Egypt (Cairo). He got the noble prize for literature in 1913.

7. The _______________ government signed a pact with SISSO (Sulabh International Social Service Organization for the construction and maintenance of hybrid toilet complexes in its nine cities.
Odisha.

8.Name the tourist train which has been launched for pilgrims by central Railway Ministry?
‘Bharath Darshan’

9. Recently, The central govt. has announced that how many numbers of Indian satellites are operational in the space?
34.

10. Which private sector bank has to get approval by SEBI to act as custodian of securities?
YES Bank.

11. Name the space exercise which was conducted by Indian Army at Rajasthan?
“Chakravyuh-II”.

12. Which is world’s no.1 browser in the world?
Google chrome.

13. Which state govt. plans to launch its grid connected Rooftop solar power project with an aim of scaling up the solar power generation?
Gujarat.

14. India has signed the MoU with which organization to promote traditional medicine?
WHO (World Health Organization).

15. Who was appointed as the director on the board of ICICI prudential Asset Management Company?
Sankaran Naren.


16. To spread the importance of Ayurveda and Ayush, the Ayush Ministry has signed a pact with which organization?
WHO (H.Q.: Switzerland, Geneva, Ayush Minister: Shripad Yesho Naik).

17. Who got the best actor award in the year 2016 by BAFTA (British Academy of Film and Television Arts)?
Mark Rylance.

18. The South Indian bank has been tied up with which bank for online inward remittances from Australia at competitive rates?
Australian National Bank.

19. In which state the ‘chinnar’ wildlife sanctuary is located?
Kerala.

20. The supreme court ordered the TRAI (Telecom Regulatory Authority of India) to manage the telecom companies to compensate which services levied?
Call Drops.

21. The market regulator SEBI has decided to tighten the norms of which instruments to curb round-tripping and restrict money laundering?
Participatory Notes.

22. Which is world’s largest cargo carrier aircraft landed at the Rajiv Gandhi International Airport in Hyderabad in on -route to Australia from Europe?
Antanov An – 225 Mriya.

24. Which Indian university has celebrated its 100 years completion function and which was set up in 1916?
Banaras Hindu University.

25. In which place, Indian Navy has launched Harbour Defence Systems at the National Dockyard in ____________?
Visakhapatnam.

26. Who won the gold medal at the European Taekwondo Championships?
Maurad Laachraoui.

30. Which state government launches the artificial programme of masheer fish for rehabilitation and conservation of Golden Masheer fish?
31. Who is the newly elected president of BCCI?
Anurag Thakur.

34. Which day is observed as Anti-Terrorism Day?
21st May.

35. Name the web portal to fast track the taxpayer grievances launched by IT department?
e-Nivaran.

36. Who is the chief minister of the state Kerala?
Pinarayi Vijayan.

37. Recently, India imposes the ban on travelling to which country in view of prevailing security situation?
Libya.

41. Which foreign bank plans to shut down it’s 24 branches in India?
HSBC (Uk based bank).

42. Who is the newly appointed Prime Minister of Turkey?
Binali Yildrim.

43. Name the Robot which is installed by Law Firm Baker Hostetler of world’s first artificial intelligence lawyer in the United States?
ROSS

45. Shwetha Rathore is associated with which sport?
Body Building.

46. Which Day is observed as World Telecommunication and Information Society Day ?
17th May.

47. Every year World AIDS vaccine day is observed on which day?

48. Which country has been developed an App called Group Sharing to share content and commentary group messaging style on any topics?
Google.

49. Who is the author of the book ‘The Drowned Detective’?
Neil Jordon.


51. International Buddha Poornima Day is celebrated on which day to commemorate Buddha Birthday?
21st May.

52. Who is the chief minister of Assam state?
Sarbananda Sonowal

53. Who is the newly appointed first women president of  the country Taiwan?
Tsai Ing- Wen. 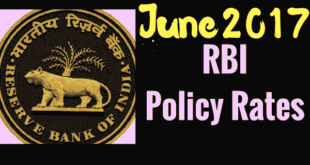 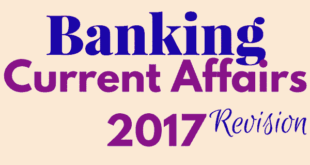 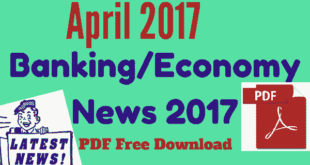