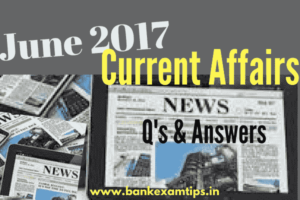 Recently RBI initiated PCA (prompt corrective action) for which bank due to its high NPAs and negative return on assets?
Dena Bank

Which PSU Bank has launched ‘Star Mahotsav’ a mass-contact program to recover bad loans, disbursing new loans and promotion of its products and services?
Bank of India

Explanation: Under this program, they contact every customer at their doorstep to recover bad loans, disbursing new loans and promotion of its products and services.
BOI CEO & MD: Dinabandhu Mohapatra
Head Office: Mumbai,
Tagline: Relationships beyond Banking.

Who is the head of the committee ‘Uday Kotak committee’ formed by SEBI (Securities and Exchange Board of India) on Corporate Governance?
Uday Kotak, Chief of Kotak Mahindra Bank

According to World Bank’s Global Economic Prospects (GEP) report, What is the India’s GDP growth rate in 2018?
7.5%.

Which country will be hosting the board of governors meeting of the AIIB (Asian Infrastructure Investment Bank)?
Jeju, South Korea

Who was appointed as the Registrar of Copyrights, Department of Industrial Policy and Promotion?
Hoshiar Singh

Who has been appointed as the CEO of Prasar Bharati with the replacement of Rajeev Singh?
Shashi Shekar Vempati

Who will be the next president of United Nations ( UN) General Assembly?
Slovakia’s Miroslav Lajcak

Who will become the next Prime Minister of Ireland?
Leo Varadkar (Indian Origin)

Who was sworn in as the 40th Prime Minister of Nepal?
Sher Bahadur Deuba.

The India approved the $318 million line of credit for the developments of which country’s railway sector?
Sri lanka

By this protocol, The usage of materials for marriage decorations, serving plates and other things will make with nature-friendly products.

Totally 450 bicycles made available and 48 automated docking stations (near universities, tourist areas, and offices) with affordable fee. If anyone wants to take the bicycle, they need to swipe smart card and take a bicycle and can handover at any other stations and fee can be deducted from their smart card at the destination.

The India stood at which position in Global Peace Index 2017 among 163 countries?
137th Rank

Name the hottest giant planet that is more hotter than stars found by astronomers.
KELT-9b.

Who is the author of the book ‘Ministry of Utmost Happiness’?
Arundhati Roy.

Who won the Thailand Grand Prix Gold badminton tournament title 2017 under Men’s Singles Category at Bangkok?
Bhamidipati Sai Praneeth (India).
He got this title by defeating Jonatan Christie of Indonesia.

What was the changed name of West Indies cricket team on its 91st anniversary?
‘WINDIES’