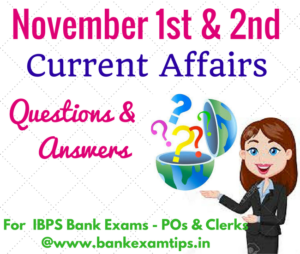 Which is the 3rd state that has become ‘Open Defecation Free’ after Sikkim and Himachal Pradesh?
Kerala.

How much amount of fund was sanctioned by the Union Finance Ministry for the restoration of Infrastructure in Jammu and Kashmir?
1093 crores.

Who is the president of European Council?
Donald Tusk.

Who has been appointed as NonExecutive Chairman of YES Bank?
Ashok Chawla.

Who is the New Chairman of CBDT (Central Board of Direct Taxes)?
Sushil Chandra.

Supreme Court appeal the central ministry to frame which policy and made it YOGA compulsory for the students (Ist to VIII Class) all over the country?
National Yoga Policy.

According to World Bank and DIPP (Department of Industrial Policy and Promotion) report, Which states are on top of the list ‘Ease of Doing Business in India’?
Andhra Pradesh & Telangana – 1st Slot,
Gujarat – 2nd slot.