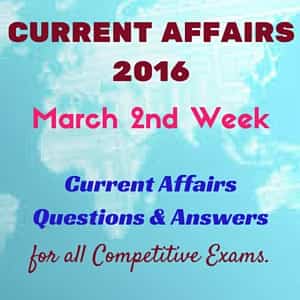 Current affairs play an important role in almost every competitive exam. To answer these questions has to be up to date in knowing the daily news -national, international, financial, economy, business, sports etc., By keeping this in mind, we have collected and provided here some of the current affairs questions with answers based on the news happened in march 2nd week, 2016. These questions are useful to the candidates who are preparing for upcoming govt. jobs – SBI Bank Exams, IBPS Bank Exams, SSC-CGL Exams, Railways, UPSC Exams and other competitive exams 2016.

1. Who is the CEO of the India’s largest online e-commerce platform ‘Flipkart’?

– Binny Bansal (He is replaced with Sachin Bansal).

2. Which bill has been passed in Lok Sabha on 9th march, 2016 related to enemy property?

3. Which scheme is recently approved by the content to provide free LPG to poor women?

4. How many countries are participating in the three-day summit of first maritime India Summit? Which will be going to hold at Bombay Convention & Exhibition Centre from April 14?

5. What is the main aim of First Maritime India Summit?

Ans.: Maritime India Summit is conducted to create awareness in shipping center. 57 nations are invited here for business agreements of worth Rs.72000 crores.

6. Recently, which bill has been approved by the parliament to develop rivers as transport routes?

7. What is the importance of Raptor MoU signed by India?

Ans.:  For saving 76 species of birds of prey. In which 50 are available in India.

9.  Who is the newly elected president of Aluminum Association of India (AAI)?

10. What is the name of 6th navigation satellite launched by ISRO?

11. World Kidney Day is celebrated on which day?

– March 10th.  To spread awareness about the importance of kidneys.

13. Who is elected as secretary general of ‘Arab League’?

14. The Union Government will set up online marketing platform called as ‘Mahila e-Haat’.

15. Memorandum of Understanding has been signed between India & IMF for setting up

17. Which badminton player has got ‘All England Badminton Title 2016’?

24. What is the theme of International Women’s Day which was celebrated on 8th march, 2016?

26.Which bank has been linked up with five startups to strengthen its web, mobile and payment services?

27. The Union Power Minister announces ‘UJALA- Unnat Jyoti by Affordable LEDs for All’ to save power.

28. What is the name of the Unmanned Spacecraft to Mars launched jointly by Europe & Russia?

30. ICICI Bank has been linked with which car company for the co-branded credit card?

31. Who is appointed as Deputy Chief of Army?

35. Who is the newly elected president of Myanmar?

36. Name the country, which has been decided to be a partner of India’s Smart City Programme?

37. What is the full name of former Lok Sabha speaker P.A. Sangma who has died recently?

38. Which country has emerged as the biggest buyer of Indian Sugar in 2015-16? Myanmar (According to the records of Myanmar ISMA (Indian Sugar Mills Association),  9.5 lakh tons of sugar has shipped from India.

39. Expand term CBEC – Central Board of Excise and Customs.

40. Who is the president of ADB (Asian Development Bank)?