Important Days in 2019 for Competitive Exams 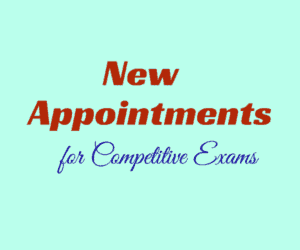 New Appointments in India happens in various organizations due to new requirements, resignations or retirements. The appointments in major organizations and government agencies are important to be aware and learn for those who are preparing for various competitive exams – banks, SSC, railways, Upsc etc.. Here, we are updating the list of new appointments in India 2018  pdf download format to make it simple for the job seekers by analyzing latest current affairs 2018.

Next ambassador of India to South Korea (DPRK): Atul Gotsurve.

Next Governor of People’s Bank of China: Yi Gang

Who was appointed as a Chief Economic Advisor to US President Donald Trump?
Larry Kudlow.

US Ambassador to India: Kenneth Juster

Who will be next High Commissioner of India to the Republic of Cyprus?
R.K. Raghavan

who has been appointed as new Youth Affairs and Sports Minister?
Rajyavardhan Singh Rathore

Who took charge as the new MD & CEO of Vijaya Bank?
Sankara Narayanan.

Who was elected as the new Chairman of Press Trust of India (PTI)?
Viveck Goenka.

Who was appointed the interim chairman of the GSTN (Goods and Services Tax Network)?
A.B. Pandey (CEO of UIDAI – Unique Identification Authority of India).

Who was appointed Comptroller and Auditor General of India (CAG)?
Rajiv Mehrishi

Who has been appointed as the Union Railway Minister in replacement of Mr. Suresh Prabhu?
Piyush Goyal.

Who is the new Defence Minister after reshuffling the cabinet ministry?
Nirmala Sitaraman.

Which Indian origin person has been appointed as the Interim President of Singapore?
Joseph Yuvraj Pillay.

Who has been nominated as the next U.S ambassador to India?
Kenneth I. Juster.

Who has been appointed as the New Chairman of the software giant Infosys?
Nandan Nilekani.
CEO of Infosys: Vishal Sikka.

Who will be the next ‘Chairman & Managing Director’ of India’s biggest oil producer ONGC (Oil & Natural Gas Corporation)?
Shashi Sankar.

Who has been sworn in as Chief Minister of Nagaland?
TR Zeliang.
Governor of Nagaland: PB Acharya.

Who has been appointed as the global goodwill ambassidor of UNICEF?
Lilly Singh (The Indian origin Canadian Youtube star).

Who is the newly appointed CMD of Oriental Bank of Commerce?
Mukesh Kumar Jain.

Who is the newly appointed MD & CEO of DHFL Insurance Company?
Vijay Sinha.

Who has been taken oath as Director General of GSTI (Goods & Services Tax Intelligence)?
John Joseph.

Who is the newly appointed Chief Election Commissioner by the law Ministry?
Mr. Sunil Arora.