Who has been conferred with ‘Excellence in Technical Innovation Award 2016’ by ISA (International Society of Automation)?
Roxy Arora. 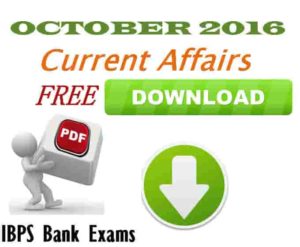 Which state govt. has launched ‘Lalima Abhiyan’ to prevent and create awareness on Anemia?
Madhya Pradesh.

Name the potent greenhouse gas that India has decided to stop and avoid production of that gas by 2030 to reduce pollution?
– HCF-23.

Name the comic character that has been considered as UN girls Empowerment Ambassador 2016?
– Wonder Women.

Which state government has been launched the Samajwadi Smart Phone Scheme?
Uttar Pradesh.

India recently signed an agreement with which country for developing a network of Agro irradiation centers?
– Russia.

Who is the president of UNESCO in 2016?
Irina Bakova.

Which international agency has been partnered with India to implement UJALA Scheme globally as part of energy savings?UJALA – Unnat Jyoti by Affordable LEDs for All).
IEA (International Energy Agency).

Recently which country was accused with the statement of UNESCO on the old city of Jerusalem in October 2016?
Israel. (Prime Minister of Israel: Benjamin Netanyahu, President: Reuven Rivlin Capital: Jerusalem, Currency: Israeli Shekel).

Which country is the 2nd largest producer of silk in the world?
India.

Which Indian state celebrates the festival ‘Batukamma’ and got placed Guinness book of records?
Telangana.

Who is the chief guest of ‘Republic Day’ in 2017? Was he invited in advance by Indian Govt.?

Which state govt. has appointed the international sports person as Deputy Superintendent of Police (DSP)?
Haryana.

Name the expert committee that has submitted its report on the existence of the Sarasvati River
– K. S. Valdiya Committee.

Name the campaign launched by PM ‘Modi’ to send messages to soldiers?
#Sandesh2Soldiers

Name the mobile phone that has been banned on Flights by the US Department of Transport after getting reports that have caused to catch fire in Flights?
Samsung Galaxy Note 7.

Which is the first PSU bank that has opened a branch in Yangon, Myanmar recently?
SBI

Which PSU bank has announced the PV Sindhu and K Srikanth as its brand ambassadors’?
Bank of Baroda.

RBI introduced with the new denomination of currency notes – Rs. 2000.

Name the book for which Ms. Arundhati Roy was conferred with Man Booker Prize in 1997?
“God of Small Things”.

Which Indian shooter has got the silver medal and named as ‘champions of champions’ by ISSF (International Shooting Federation) in Italy?
Jitu Roy (Ace shooter)