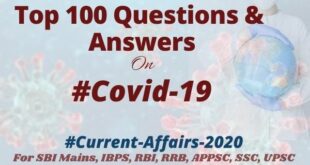 Persons in News – Knowing popular personalities in the news is very much important in preparing for any competitive exams. These types of questions – important persons in news are asked in the General Awareness section.

So, Remembering newly appointed heads of popular organizations, famous personalities in news by getting awards and honors, winners in sports, latest appointments, newly elected Chief ministers and Governors of Indian States, leaders of different countries who visited India recently or committee leaders in recent news is important to get qualifying marks in the general awareness section of various competitive exams as well as bank exams 2020.

These are helpful for those who are preparing for various upcoming competitive exams 2020 in India.

Famous Persons in News are considered from different categories of recent news updates – Latest Appointments, Heads of popular and important organizations, Leaders who visited India, The people who got honored with different prestigious awards in different fields,  Sports personalities.

Knowing about popular persons in recent news is also important to prepare for bank exams and other competitive exams. As part of the general awareness section, we can expect 1 to 3 questions on famous personalities in news – award winners, appointments, sports, obituaries

Heads of various Departments of India in 2020:

Heads of Other countries 2020:

The heads of other countries, prime ministers, a president who visited India recently or newly elected persons who were in recent news.

In the past 3 months, the persons who won awards and honors in various fields are listed below.