Current Affairs is the important part of the General Awareness section in every competitive exam especially  in banking exams. The candidates who are preparing for any competitive exam and bank exams have to be up-to-date with current affairs on daily basis in various aspects – National , International, Economy, Awards & Honours, Books & Authors, Science and technology, Important Days, Persons & Places in News , Sports & Games etc., 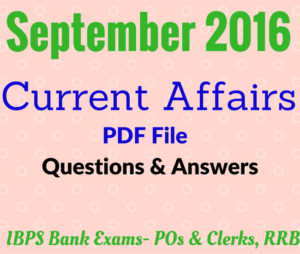 Which bank has got four awards for inclusive insurance for 2016 from the Scotch group?
Karnataka Vikas Gramin Bank (KVGB).

Which bank has emerged as India’s most valuable brand ?
HDFC.

Which company has been tied up with ICICI bank for launching UPI (Unified Payment Interface) for merchants?
ftCash.

United Bank of India (UBI) has received __________ crores from the central government through preferential allotment of equity shares?
Rs. 608 crores.

The Bombay Stock Exchange (BSE) has been tied up with which social networking platform to update its Live Stock Updates?
Twitter (CEO: Jack Dorsey).

According to Standard & Poor (S & P) Global Ratings, What is the estimated GDP growth of India in next few years?
8%.

Which is the first bank that launches digital account opening process in mobile?
Kotak Mahindra Bank.

Who was appointed as the chairman of ‘Insolvency and Bankruptcy Board of India’ by the central government?
Mr. Madhusudhan Sahoo.

Who has been appointed as the chairman of UPSC (Union Public Service Commission)?
Alka Sirohi.

Who was conferred with Clinton Global Citizen Award 2016?
Adi Godrej.

Who has been reappointed as the president of World Bank ?
Jim Yong /Kim.

Who was elected as president of BFI (Boxing Federation of India)?
Ajay Singh (Uttarakhand).

Who was appointed as the Indian Ambassidor to the Republic of Djibouti?
Anurag Srivastava

Who has been honored with Lata Mangeshkar Award?
Uttam Singh (Violinist and Music director).

Who has been chosen as goodwill ambassidor of United Nations?
Nadia Murad.

Who has been appointed as the next ambassidor of India to Sweden?
Monika Kalif Mehta.
(Capital of Sweden: Stockholm, Currency: Krone).

Recently the central government has removed the Chairman & Managing Director of which of the following public sector banks?
Sushil Muhnot (CMD of Bank of Maharashtra).

Who was appointed as the brand ambassidor to the US (United States)?
Navtej Sarna.

Who has been appointed as the chairman of UPSC (Union Public Service Commission)?
Alka Sirohi.

Who has been conferred with humanitarian award 2016?
Aung San Suu Kyi.

Who is the newly elected president of Indian Statistical Institute (ISI)?
Vijay Kelkar.

Who has been conferred with Bangabibhushan Award 2016 by a west Bengal government?
Lata Mangeshkar.

According to Forbes Magzine, Who topped the list of 100 richest Indian 2016?

Name the persons who are recently appointed to the 3 member committee of Monetary Policy?
Chetan Ghate, Pami Dua, Rabindra Dholakia.

Who is the new chief justice of Kerala high court?
Mohan M. Shantanagoudar.

Who has been honored with ‘Lalit Arpan Samman 2016’?
Shubha Mudgal (Singer).

Which country will be hosting the winter Olympics at Pyongyang in 2018?
South Korea.

As per ICC ODI Rankings, Indian Cricket team stood at which position?
3rd rank.    (Australia is at 1st Position and New Zealand at 2nd Rank).

According to the Time Higher Education Work ranking index, Which of the university has been ranked first in the world leading universities 2016?
Oxford – 1st,
California – 2nd.

Which of the road in Delhi has been recently renamed as Lok Kalyan Marg?
Delhi’s Race Course Road.

According to Master Card Global Destination Cities Index, Which of the Indian cities are listed in top 100?
Mumbai, Chennai, Delhi, Kolkata, Pune.

Name the longest bridge in India connecting two states Assam and Arunachal Pradesh over Brahmaputra River. Which will be operational by 2017?
Dhola- Sadiya Bridge. (9.15 km)

Which day is observed as ‘World Tourism Day’?
27th September

Which day is celebrated as ‘World Rabies Day’?
28th September

PMUY: Pradhan Mantri Ujjwala Yojana: Its main aim is to provide 5 crore LPG connections to Indian BPL family households in the name of the woman.

Google has recently launched the mobile app for instant messaging. What is the name of that App?
Allo.

Name the high-speed supercomputer, which was inaugurated at IIT, Guwahati?
‘Param – Ishan’.

______________ got the ‘Best Reader Engagement Award of South Asian Digital Media Awards at world association of Newspapers and News publishers India 2016 conference in 2016 at Kolkata?
‘The Hindu’.

Gurgaon is newly changed to _________ the city located in Haryana state.
‘Gurugram’.

The first Railway Budget of India was presented in which of the year. Recently union govt. has approved that there is no separate budget for Railway ministry and they merged the Union Budget and Railway Budget into Single budget?
1924.

Which ranks that India got among 188 countries in recent health survey?
143.

Name the govt. the agency which has aimed to start short term to the long term action plan that helps India to win 50 medals in 2024 Olympics?
NITI Aayog.

Name the joint military exercise which was started by India and Russia?
Indra.

Which is the first country to launch driverless boats?
Netherlands.

Who is the Author of the book ‘Citizen and Society’?
Hamid Ansari (Vice President of India).