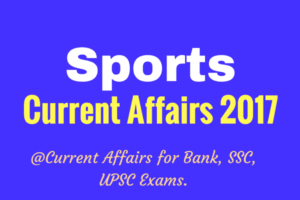 What does ‘W’ denotes in the term ‘IWF’ and who is the president of IWF?
W- Weightlifting.
International Weightlifting Federation,
Birendra Prasad Bhaishya.

Who is the winner of China Open Tennis Title 2017?
Rafael Nadal (Spain).

Who was conferred with the Miss World Bodybuilding title 2017 at World Championship in Venice?
Bhumika Sharma.

Which Indian cricketer has got the no.1 position in ICC ODI player rankings 2017?
Virat Kohli.

Which tennis player got the prestigious  Under-23 Butterfly Badger Open 2017 in the United States?
Mudit Dani.

Which of the Formula one driver received Singapore Grand Prix 2017 Title?
Lewis Hamilton.

Who is the first woman to finish the 10 km run under 30 minutes?
Joceline Jepkosgei ( Kenya).
Capital of Kenya: Nairobi
Currency: Kenyan shilling

Who is the first Indian and first women to be selected as AIBA’s representative for the IOC Athletes’ Forum?
MC Mary Kom.
AIBA: International Boxing Association.IOC: International Olympic Committee

Name the sports mission that has launched in Maharashtra under which over 10 lakh students will play football to support FIFA U17 World Cup?
‘Maharashtra Mission 1 Million’
Chief Minister of Maharashtra – Devendra Fadnavis,

Rogers cup is associated with Tennis.