Syllogism can be solved by using two methods:

First of all, Learn how to draw Venn diagrams for different type of statements.

Eg 1: Some girls are singers 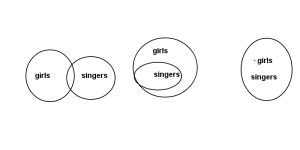 Eg: All girls are singers 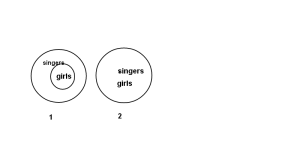 Eg: No girl is singer 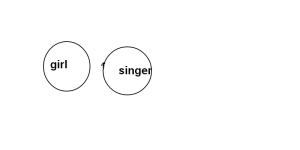 Solution:
Solve the above statements with Venn diagram method.
Draw Venn diagram for each statement separately and then combine for all three statements diagrams into one and analyze conclusions which are satisfying as per diagram. 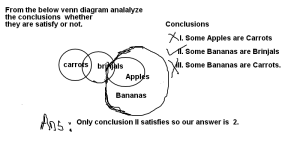 Question 2:
Statements: All chillies are garlic.
Some garlic is onions.
All onions are potatoes.
No potato is ginger.

Conclusions: I. No onion is ginger
II. Some garlic is potatoes
III. Some chillies are potatoes


Question 3:
Statements: Some girls are singers.

Somesingers are tall.
All tall are foreigners.
All foreigners are fair.

Conclusions: I.Some singers are foreigners./span>
II. Some fair are tall.
III. All tall are fair.

Question 4:
Statements: Some Windows are Doors
All Doors are Walls.
No Wall is Roof.
All roofs are shelters.

Conclusions: I. Some Windows are Walls
II. No Wall is Shelter.
III. No Door is Shelter.

Statements: All bottles are jars.

Some jars are pots.

All pots are delicate.

No delicate is a tank.

Conclusions: I. No pot is a tank.
II. Some jars are tanks.
III. Some bottles are pots.

Statements : Some birds are ducks.

Some ducks are small.

No small is the swan.

All swan are nice.

Conclusions: I. No small is nice.
II. Some small are birds.
III. Some birds are nice.

Question 7:
There are four statements followed by 2 conclusions I and II. You have to decide which of the given conclusions logically follows from the given 4 statements.

Q.7. Statements : Some pans are bowls
All bowls are vessels
All steel are vessels
No vessel is copper

Q.1.) Conclusions: I. No copper is a bowl
II. Some pans are vessels

Q.1.) Conclusions: I. All vessels are steel
II. Some bowls are copper

Answer: (4) Neither I nor II follows

Q.8.2.) Conclusions: I. All rings are ornaments.
II. Some gold does not chain.

Example Question 9: Read both the conclusions and then decide which of the given conclusions logically follows from the given statements.

Choose the correct option from the given answers:

9.1.)Statements: All parrots are birds

No bird is an animal

All animals are mammals

I. At least, some birds are mammals
II. All mammals being birds is a possibility.

I. No parrot is an animal
II. All parrots being mammal is a possibility