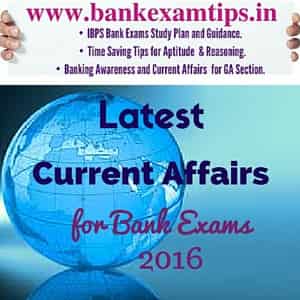 1. On the occasion of 97th Birth Anniversary of Arjan Singh on 15th April, The Marshal of Indian Airforce renamed the “Panagarh Airbase” in Best Bengal as ______________.
“Airforce Station Arjan Singh”

2. Who was the first Indian Air Chief to be promoted to the rank of Air Chief Marshal on Jan 16, 1966?
Arjan Singh.

3. Who is the present chairman of EPFO (Employment Provident Fund Organization)?
Shri Bandaru Dattatreya (Union Ministry of Labour and employment).

8. Which rank does Delhi get among the list of ’50 world’s Future Ready Cities’ based on Human capital, Infrastructure & Commerce?
Delhi – 44th Rank.

9. On 15th April 2016, which country is badly hit with a powerful earthquake with the magnitude of 7.3?
Japan.

10. Who is the president of Brazil who is facing impeachment problem in recent days?
Dilma Rousseff.

11. Who is the newly elected ‘Acting Chief Justice (CJ)’ of Nepal, she was the first woman CJ of Nepal?
Sushila Karki.

12. Who is the Prime Minister of Malaysia?
Abdul Razak.

14. What was the ‘name’ that raised conflictions between U.K. Court and a Mother and warned her not to keep that name to her daughter as mothers unusual choices of a name might harm their children?
“Cyanide”.

15. Which country’s Prime Minister has recently introduced a legislation to legalize physician-assisted suicide for the people who are suffering from serious medical conditions?
Canadian Prime Minister – “Justine Trudeau”.

Previous Latest Current Affairs Questions for Bank Exams- 15th April 2016.
Next How to Find Square the root of a Number – Easy Trick