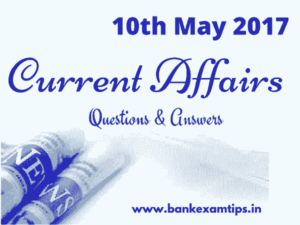 7. Who is the Chief Economist and Director General of ADB (Asian Development Bank)?
Yasuyuki Sawada.

8. Who were appointed as the new members in the CBEC (Central Board of Excise and Customs)?
R K Mahajan and Mahender Singh.
Notes: Head Quarters: New Delhi,
Chairperson of CBEC: Mrs. Vanaja N. Sarna.

10. What is the full form of FSSAI working on food safety by setting up a 11 member committee to avoid high in Fat, Salt, Sugar content foods?
FSSAI – Food Safety and Standards Authority of India. (

12. Which is the annual joint military exercise of US and Philippines?
Balikatan (Shoulder to Shoulder).